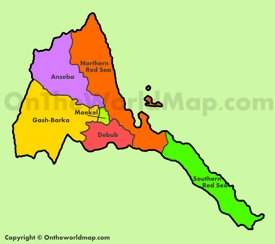 The position of Eritrea prior to the 1880s, large parts of it had been subject to Ottoman and Egyptian authority. During that decade, Italy began to assert a colonial presence in the region, first at the Red Sea port of Assab and in 1885 at Massawa. Subsequent Italian attempts to expand its control inland were successfully resisted by Eritrean people and farther south by Ethiopians. However, in 1889, by the Treaty of Uccialli, Ethiopia and Italy established the boundary between the Empire of Ethiopia and the state of Eritrea then in Italian colony. On  1 January 1890, Italy formally established the Colony of Eritrea.  In 1893, the Italian expansion inland continued until the battle of Adwa in 1896. A boundary arrangement was then established between Ethiopia and Italy. Subsequently, in 1900, 1902 and 1908, Ethiopia and Italy concluded three boundary agreements that, together, addressed the entire common boundary of the Colony of Eritrea and the Empire of Ethiopia. None of the boundaries thus agreed was demarcated. Indeed, these boundaries were not fully delimited either.

In 1935, Italy invaded, occupied and annexed the whole of Ethiopia. In 1941, the United Kingdom expelled Italian forces from both Ethiopia and Eritrea, and established a British Military Administration, which governed both countries from headquarters in Addis Ababa. The British Military Administration ended in Ethiopia with the conclusion of an agreement between the United Kingdom and Ethiopia on 31 January 1942. Emperor Haile Selassie then resumed control of his country. The former Italian Colony of Eritrea remained under British control until 1952.
By the Treaty of Peace with the Allied Powers of 1947, Italy renounced “all rights and title to the Italian territorial colonies in Africa” and agreed that “pending their final disposal, the said colonies shall continue under their present administration.” As the Allied Powers were not able to agree upon the disposition of Eritrea within the time period established by the Peace Treaty, the matter was referred to the United Nations General Assembly under Paragraph 3 of Annex XI of the Treaty. On 2 December 1950, the General Assembly adopted Resolution 390A(V), which recommended that “Eritrea shall constitute an autonomous unit federated with Ethiopia under the sovereignty of the Ethiopian Crown.” Against the will of the Eritrean people. The Federation of Eritrea with Ethiopia was accordingly established on 11 September 1952.

Despite various resistance, and demonstrations held by the Eritrean people, in 1961, Ethiopia declared null and void the Treaties of 1900, 1902 and 1908. On 14 November 1961, Ethiopia declared the Eritrean Constitution void, ended the federal status of Eritrea, dissolved the Eritrean parliament and incorporated Eritrea into Ethiopia as a province.  Shortly after the incorporation of Eritrea into Ethiopia, there an armed Eritrean resistance developed. In 1974, the Ethiopian armed forces deposed Emperor Haile Selassie, and a junta or Dergue, led by Mengistu Haile Mariam, took control of Ethiopia. The Dergue continued to prosecute the war against the Eritrean People’s Liberation Front (“EPLF”). By the late 1980s, the EPLF controlled most of Eritrea except for Asmara and Massawa. In February 1990, the EPLF captured Massawa. In 1991, Mengistu fled Ethiopia and the Ethiopian People’s Revolutionary Democratic Front (“EPRDF”) established an interim government, while the EPLF took control of Asmara. At a Conference on Peace and Democracy held in Addis Ababa in 1991, the right of the people of Eritrea to determine their own political future by an internationally supervised referendum was recognized. In April 1993, the referendum was held in Eritrea, supervised by international observers. Eritreans abroad were also enabled to vote. Over 99% of the voters favored independence. The United Nations Special Representative announced that the referendum process had been free and fair. On 27 April 1993, Eritrea became independent and was admitted as a member of the United Nations. On 29 April 1993, Ethiopia recognized Eritrea’s sovereignty and independence and on 30 July 1993, the two Governments concluded an Agreement of Friendship and Co-operation.

In May 1998, hostilities broke out between Eritrea and Ethiopia for Ethiopia violating the sovereign territorial integrity of Eritrea. After a number of attempts to re-establish peace between the two Parties, the December Agreement was signed on 12 December 2000, providing for the permanent termination of military hostilities between them. A major component of this Agreement was Article 4, the terms of which have been set out above, providing for the establishment of the boarder Commission.

The parties (Eritrea and Ethiopia) agree that a neutral Boundary Commission composed of five members shall be established with a mandate to delimit and demarcate the colonial treaty border based on pertinent colonial treaties (1900, 1902, and 1908) and applicable international law.
The Eritrea-Ethiopia Boundary Commission (hereinafter the “Commission”) was established pursuant to an agreement dated 12 December 2000, alternately entitled “Agreement between the Government of the State of Eritrea and the Government of the Federal Democratic Republic of Ethiopia”
Upon reaching a final decision regarding delimitation of the borders, the Commission shall transmit its decision to the parties and Secretaries General of the OAU and the United Nations for publication, and the Commission shall arrange for expeditious demarcation. The parties agree to cooperate with the Commission, its experts and other staff in all respects during the process of delimitation and demarcation, including the facilitation of access to territory they control. Each party shall accord to the Commission and its employees the same privileges and immunities as are accorded to diplomatic agents under the Vienna Convention on Diplomatic Relations.   The parties agree that the delimitation and demarcation determinations of the Commission shall be final and binding. Each party shall respect the border so determined, as well as the territorial integrity and sovereignty of the other party.

The Eritrea–Ethiopia Boundary Commission delivered its Decision on Delimitation of the Border between Eritrea and Ethiopia to representatives of the two governments on Saturday, 13 April 2002. Further, the commission reaffirmed its ruling that Badme lies in Eritrea. Badme is a town in the Gash-Barka region of Eritrea. Control of the town was at the center of the Eritrean-Ethiopian border conflict, which lasted from the end of the Eritrean-Ethiopian War in 1998 to the signing of a joint statement at the Eritrean-Ethiopian summit in 2018, 20 years after conflict started.
At this point, the wishes and desire of the Eritrean people that started 1900 (after 118 years) is to delimit and demarcate the border between Eritrea and Ethiopia once and for all. Any less will not be tolerated or accepted by the Eritreans all over the world.